Zaine Griff (born Auckland, New Zealand, 4 October 1957) is a singer and artist who formed part of the English New Wave scene of the 1980s. Although being educated and beginning as musician in New Zealand, he moved to England in the 1970s, where he continued with his artistic and musical career, becoming a solo artist. He worked with Lindsay Kemp, in arts, and The Human Instinct, The Kinks, David Bowie and Hans Zimmer, in music. Being brought up in New Zealand and Tahiti by his Danish parents, he learned guitar in an early age. 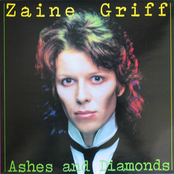