Seminal analog sounds from Australia The band started in 1981 in the basement of an art school in when two art students, Michael Trudgeon and Valek Sadovchikoff shared the same sonic space and found a common love of sweeping oscillators. They were soon joined by Steve Adam and Ramesh Ayar. Ramesh wrote several songs with Informatics but soon moved on to other passions. Philip McKellar joined the band in 1983. Informatics were seduced and fascinated by the capabilities of analogue synthesizers. 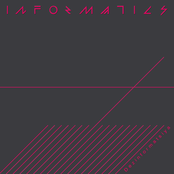