Hybrid Kids is a project by one time Mott The Hoople keyboard player Morgan Fisher. The Hybrid Kids first album from 1979 was originally conceived as a spoof compilation album featuring a variety of 'bands' from Peabody, an obscure little town in Kansas (at that time American towns like Cleveland and Akron were viewed upon as hot-beds of modern rock music). When this concept was stated on the radio and in the press, quite a number of people believed it! In truth 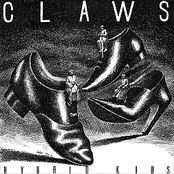 The Naughtiest Girl Was A Monitor